Not that long ago Skoda released the all new Karoq, the replacement for the aging Yeti. With the car also came quite a bit of criticism from some people and journalists. Why? Well, it seems the Karoq is a bit too conventional in its design, and it doesn’t really offer all the features of its predecessor. While this is partly true, the new Karoq is usually much better equipped than the car it replaces, and it also offers a much more modern design. Unfortunately, there are some quirks about it but more on that a bit later. The new 2018 Skoda Karoq is based on the same MQB chassis as pretty much every other transverse-engine VW-Group car on the market. The car is now nearly 4.4m long, 1.85m wide and 1.6m high. While not clearly apparent, this increase in size allows for more space inside the cabin without any drawbacks.

The all new Skoda Karoq 2018 will be available for purchase on a later date this year or at the beginning of 2018. Despite the fact that pricing hasn’t ben announced we have a clue or two. Regarding the base iteration of new Karoq, it will be priced in the region of £17,000. As for upper trim versions, more will be known when the car approaches official release.

Its new MQB chassis is also considerably more rigid than the one it replaces, and it also boasts a lower center of gravity. On top of that, the car is quite a bit lighter so it should be better to drive as well. Unfortunately, not everything is great about it. It is quite clear the Karoq is pretty much identical to the Seat Ateca or the VW Tiguan, both in terms of design and size. While this does allow Skoda to keep the development costs down, it also means buyers get to choose a from a selection of 3 very similar cars. Luckily though the 2018 Skoda Karoq does have its strong points. Unlike the Ateca, the Skoda has been tweaked with comfort its mind. Thanks to that it gets comfort-oriented features as well as a different suspension setup with softer springs.

As we said, there is no question about the fact the Karoq looks nearly identical to the Ateca. From the profile, the two cars can’t be told apart. However, in the front, the Karoq shares quite a few traits with the larger Superb which is quite interesting to see. It gets a similar grille, headlights, and DRLs while the bumper is quite close to that on the Octavia. The rear of the car gets C-shaped tail lights and nearly the same tailgate as the other two crossovers based on this platform. Skoda will be offering unique rims as well as different color choices, but the basic design doesn’t change much from the rest.

We are glad to say things are completely different on the interior of the 2018 Skoda Karoq. Just like with all the other VW-Group cars, it shares parts with its siblings. However, the actual design is all new. The car features a more conservative-looking dashboard, nicely laid-out buttons which can easily be reached by the driver without looking. The instrument cluster can be configured with the same fully digital panel seen on the Audi A4 a while back while VW’s all-new 9.2-inch infotainment system can be had as an option. This comes with 64GB of internal storage which should be more than enough for a full music library. Options will include Skoda’s sports seats seen on the RS Octavia as well as things like leather and suede upholstery and a driver’s aid package. 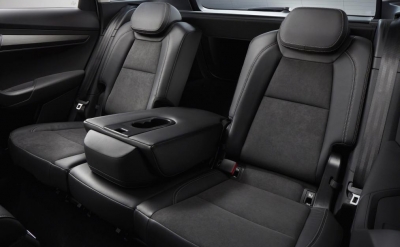 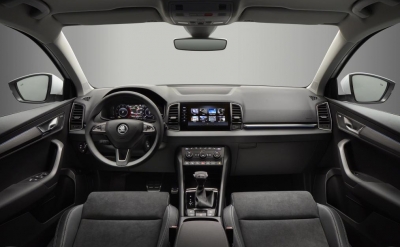 The base model of the 2018 Skoda Karoq will come equipped with a 1.0 liter turbo-three petrol engine. This will provide 115 horsepower and 175 Nm of torque, enough for city driving but not much else. For those looking for more Skoda will also offer a 1.5-liter turbo-four with 150 horsepower and 250 Nm of torque. Skoda will also offer two diesel engines. The base 1.6 liters inline four will offer 115 horsepower and 250 Nm of torque. A larger 2.0-liter turbocharged diesel offering 150 or 190 horsepower is also going to be available. With as much as 400 Nm of torque, this is also going to be the most efficient offering a combined fuel consumption of just 4.4 l/100km. A 6-speed manual and front-wheel drive will come as standard on all engines but the top-range diesel. This will only come equipped with a 7-speed DSG gearbox and all wheel drive. The same setup will also be available as an option for the other engines with the exception of the 1.0-liter TSI which will only come in FWD guise.