Everyone knows, the Land Cruiser, one of the best SUVs ever made. However, not many people know Toyota has two very different cars under the same name. The lesser model is the 2018 Toyota Land Cruiser Prado, a smaller but just as capable SUV as its larger sibling. This shares its chassis with the Hilux, but it comes with a different suspension system and quite a few other upgrades over the truck.

The result is a car that will drive just as good as its bigger brother while also offering the off-road capabilities of the truck. In order to keep it updated, Toyota just released a revision back at the Frankfurt Auto Show. They just launched it on the Australian market, and the changes are quite interesting.

Is the price any different?

In short, yes. In order to remain competitive, Toyota decided to slash the price of all of their versions by around $1,000. This makes the new Prado a better deal than before, especially since there is also more kit as standard. The base model will now start at just under $53,000 which is quite impressive for all the features it has to offer. On top of that, the range-topping model will now cost right around $84,500. All models now get as standard automated emergency braking, lane departure alert as well as automatic high-beams. The manual versions don’t get all of these but only the automatic.

Unfortunately, the updated Prado still comes with the same 2.8-liter turbocharged inline-four diesel as before. With around 130 kW and 450Nm of torque, this manages to offer a rather impressive experience. All automatic models come with all-wheel drive as standard, and all of them get an automatic hill-descent system. The manual version of the SUV, which is only available with the lesser models, only gets 420Nm of torque as the gearbox isn’t really capable of handling all that torque.

Upgrades – Inside and Out

The exterior of the 2018 Toyota Land Cruiser Prado is quite a bit prettier than before. This received a new front end with a design more in line with its bigger sibling. The rear of the SUV also received new tail lights while some markets get a different spare wheel cover. All versions are now available with premium colors, and it looks like Toyota also released a few new wheel options. The interior also received some attention. There is a new infotainment system which sports Toyota’s latest software while the standard 360-degree camera system makes the SUV that much easier to drive than before. 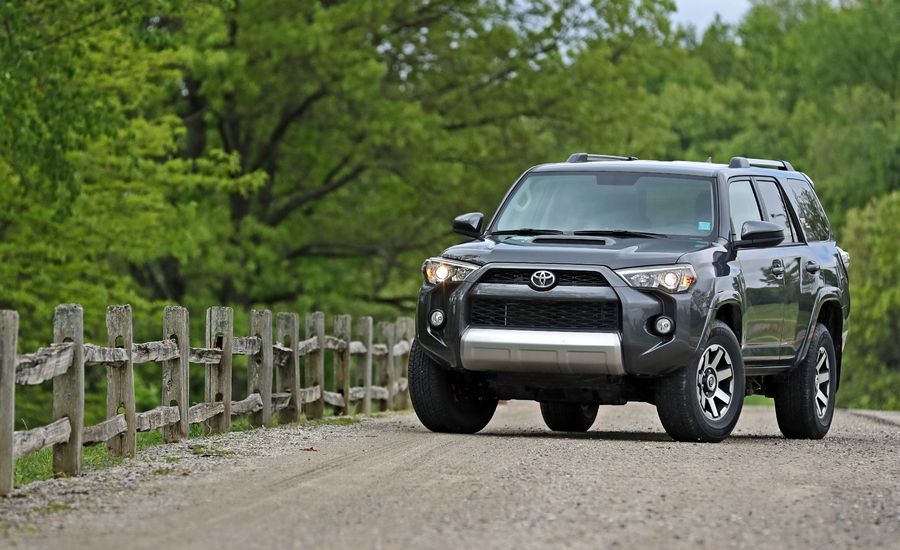 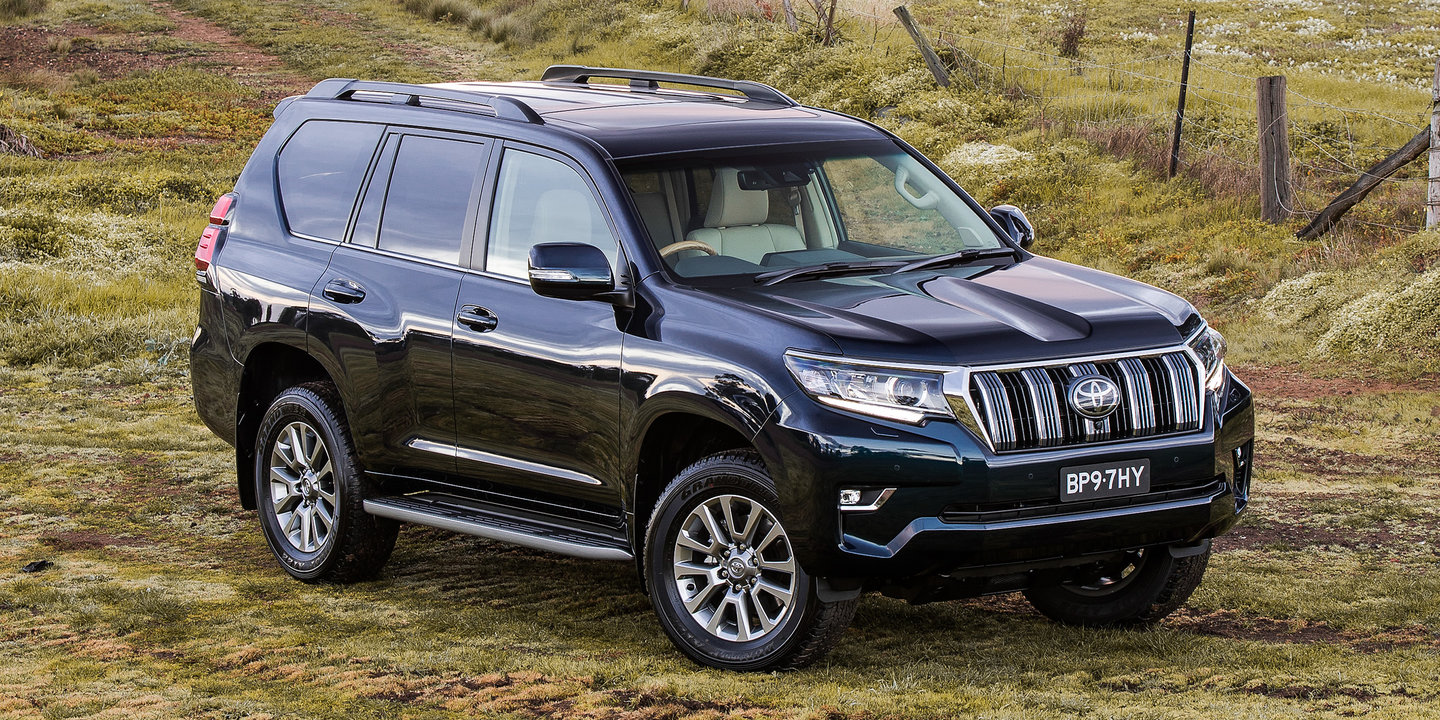 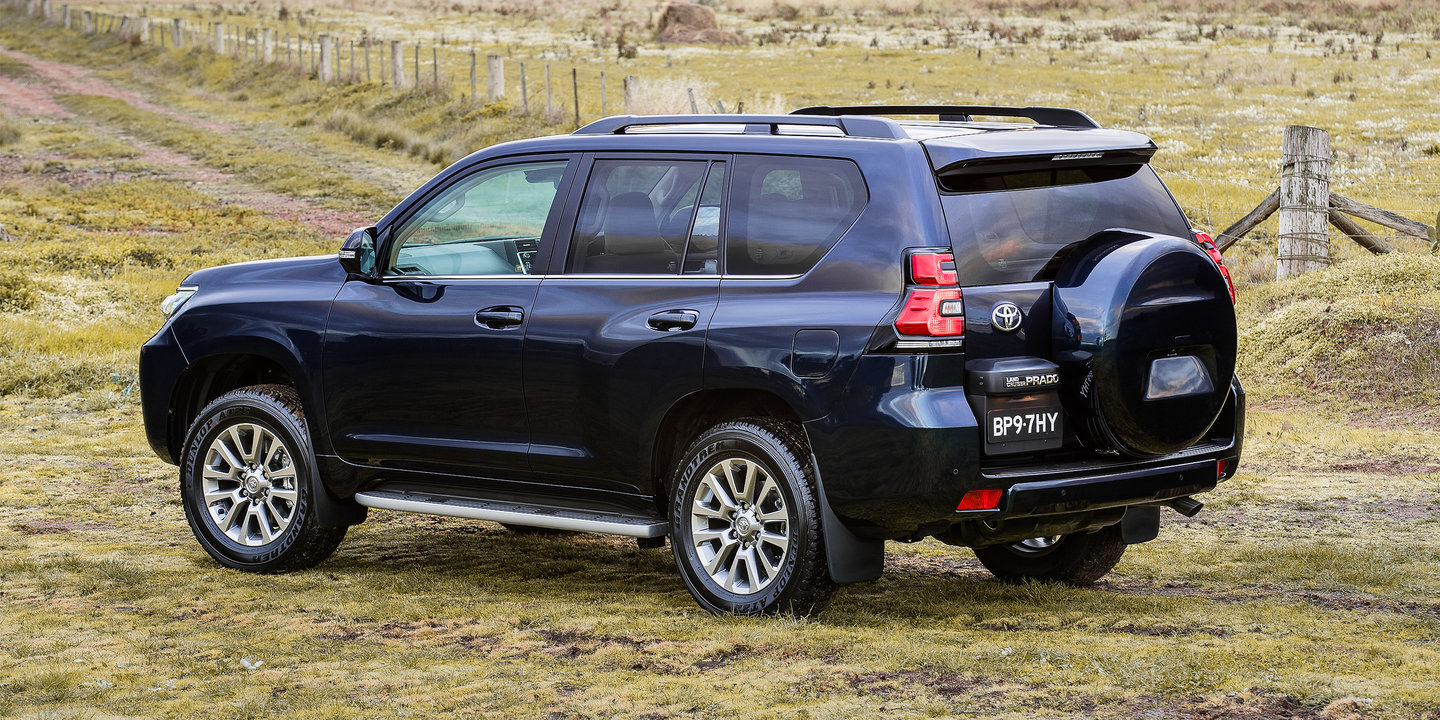 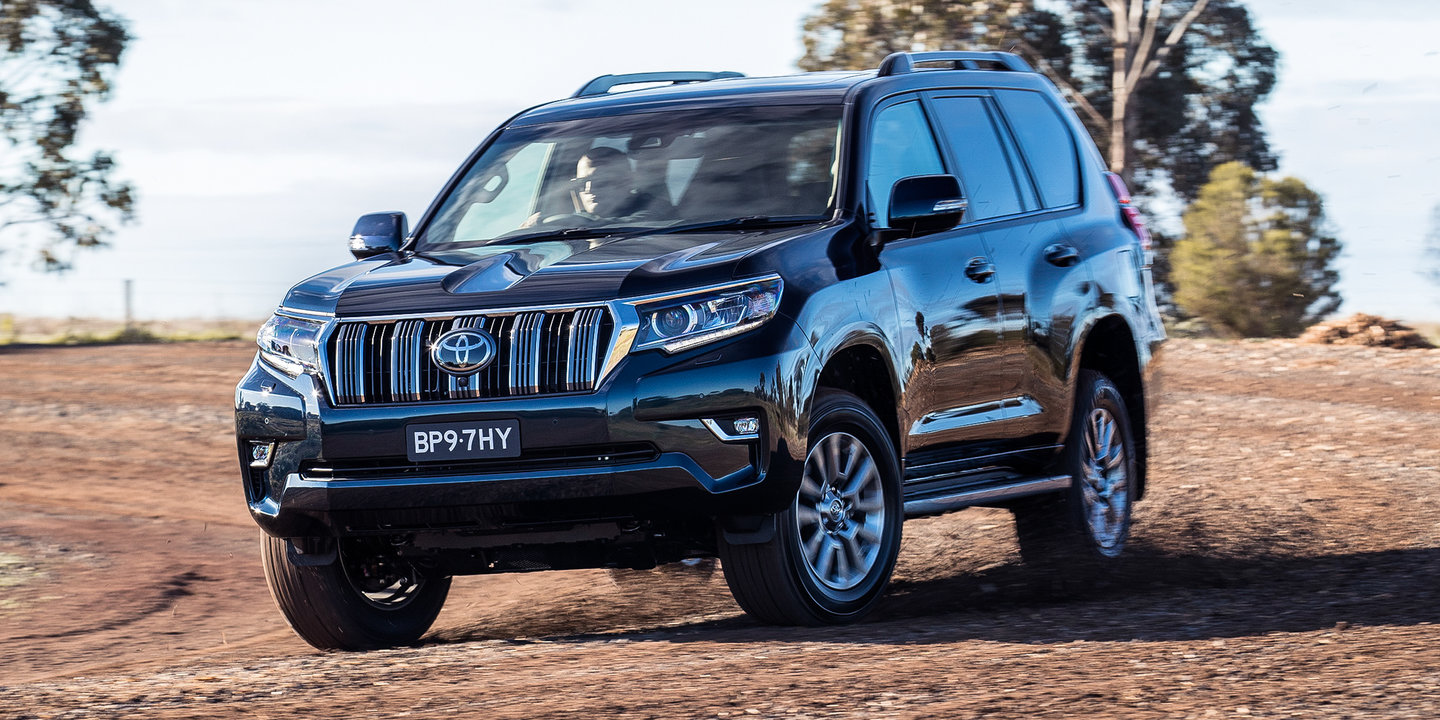 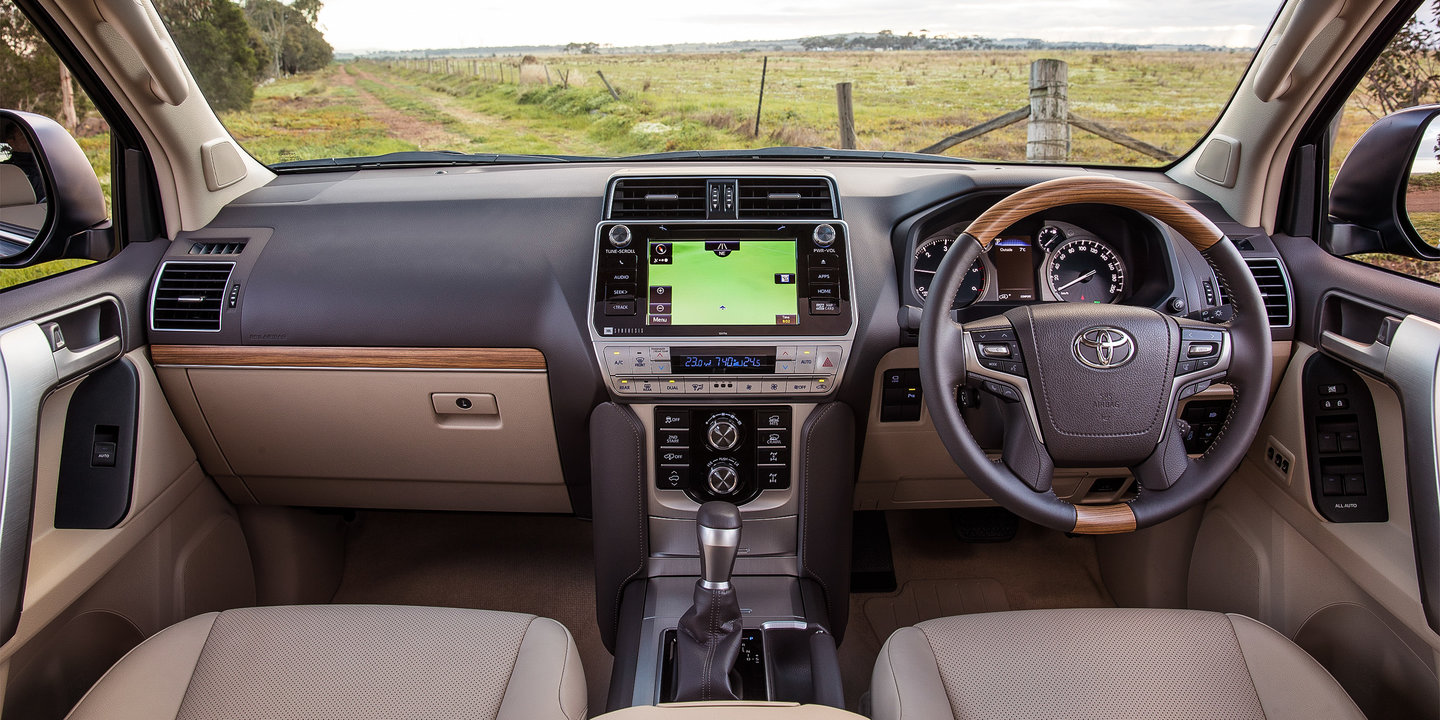 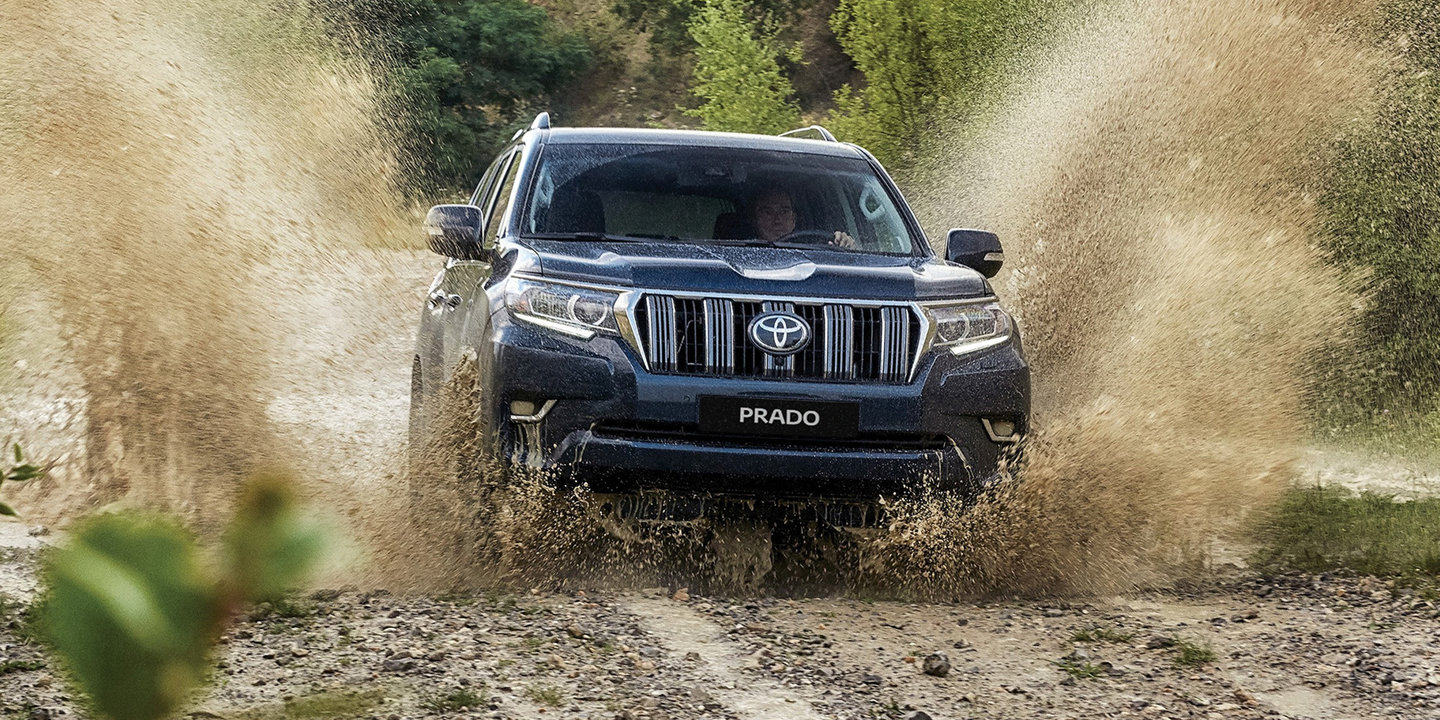 The current Prado has been released back in 2009, and since then it didn’t change all that much. It seems that this trend will continue in the future as well because the upcoming 2018 Toyota Land Cruiser Prado has been leaked not that long ago. From the leaked shots it seems the design will change, but that’s about the only real change. The chassis, running gear, and engines are set to remain the same as before.

It has been confirmed a while ago that the car will make its debut in Japan on 12th of September. Likely the price is going to be confirmed at the same time. However, we doubt much will change over its predecessor so expect the new Prado to cost right around €60,000 for a base version. The top end models are likely going to fetch in excess of €76,000 which is where most of its rivals are.

Exterior: The leaked photos give us a good idea about how the upcoming Prado is going to look. Over its predecessor, it seems Toyota went for a much more modern design. For starters, the car gets an entirely new front end. They installed a new hexagonal grille, similar to that of its larger sibling, different horizontal slats as well as much slimmer headlights. The bumper is also new, and in fact, the car’s design evolved to something quite a bit more angular than before. The rear of the new Prado is not nearly as impressive as the front end. Here the car received new taillights and a new bumper. However, it still looks mostly the same as its predecessor.

Inside the cabin: Even though the 2018 Toyota Land Cruiser Prado is still months away from release, most of its interior has been leaked. The dashboard seems to receive a much more modern design with a more modern center stack and considerably fewer buttons than before. The instrument cluster will also be replaced with a part-digital system that should be much easier to read than that of its predecessor.

Under the hood: The 2018 Prado is expected to boast the same engines as its predecessor. This means that, depending on the market, it will offer a 2.7 naturally aspirated gas engine, a 2.8-liter turbocharged diesel or a selection of older engines in emerging markets. Any of these will offer north of 160 horsepower and 200 lb-ft of torque, enough for the class it will be sold in. All versions are expected to get either a six-speed manual or a six speed automatic driving all four wheels even on the base trim level.

Jan 29, 2017 – According to some sources, Toyota will launch 2018 Toyota Land Cruiser at the 2018 Chicago SINCE. There is still a lot of time ahead, but we can already make some estimations and predictions. Land Cruiser is an elegant SUV which is quite popular in North America. It has lots of pros and cons and the most important advantage of the upcoming model is its fuel economy. Although many things are still unknown, Toyota announced that new Land Cruiser is going to have much better fuel efficiency than previous models. However, this is not the only advantage.

Land Cruiser has always been a great combination of the elegant and sporty vehicle. It has a little bit boxier design, but it looks far more attractive than other vehicles from this category. According to the first information, new Toyota Land Cruiser 2018 model won’t be much different than the current model. However, you can expect plenty of minor improvements and refreshments. We’re still unsure about all changes, but there are some that are even official. Therefore, we proudly present the upcoming elegant SUV with some off-road characteristics.

A boxy design doesn’t attract everyone, but you will simply love how 2018 Toyota Land Cruiser looks like. The front grille consists of five vertical bars with a Toyota logo in the middle. The front fascia looks very modern with the updated grille and interestingly-designed headlights. Headlight and LED daytime running lights are very well integrated. It seems that 2018 model is going to be slightly larger than its predecessors, but don’t take this to the bank since we heard this through the grapevine.

The cabin is as elegant as the exterior. Generally, the cabin is a great combination of elegance and technology. Seats are wrapped in leather which usually comes in white color. There are also some wood trims inside which make this car even more luxurious. There are also a sliding moonroof and multi-terrain system. It uses keyless ignition or the Start-and-Stop technology. There are also plenty of top-notch tech features, especially in terms of safety.

There are so many different engine predictions that it is hard to tell which one to believe in. Almost all sources have a different point of view when it comes to the powertrain. For instance, one of them suggests that new 2018 Toyota Land Cruiser will be powered by a 5.7l eight-cylinder. This engine doesn’t have a great fuel economy, but it is expected that an improved version of this V8 will be placed under the hood of the new Land Cruiser. Currently, this engine’s EPA rating is rated at 13 mpg in a city and 18 on the open road. These figures are far from being great. However, everything is possible in two years.

Perhaps fuel economy of this engine must be improved (and will be according to some statements), but power, torque, and towing capacity are just perfect. It comes with an output of 381 horsepower and 401 pound-feet of torque. Even though if Toyota doesn’t make any improvements to the power unit, this output will still deliver the goods. With a towing capacity of 2,200 lbs, it is able to pull almost everything. Please bear in mind that this engine is just a prediction and we still need to wait for the official confirmation by Toyota.

One thing we forgot to mention is that the 2018 Toyota Land Cruiser is a luxury SUV and is not for those who are on a tight budget. Some experts tell its price could reach $80,000. Whether this is true or not we’re going to find out hopefully by the end of the year. The release date hasn’t been confirmed, but don’t expect this car to enter the market before 2018. This means we need to hold our horses for quite some time.

New 2018 Toyota Land Cruiser will be powered by a 5.7l eight-cylinder. This engine doesn’t have a great fuel economy, but it is expected that an improved version of this V8 will be placed under the hood of the new Land Cruiser. Currently, this engine’s EPA rating is rated at 13 mpg in a city and 18 on the open road. These figures are far from being great. However, everything is possible in two years.