2019 Ford Mustang Shelby GT500– With the earthquake in mind! As far as word sports go with automotive world, America hasn’t seen such a glorious times in years. From incredibly sporty sedans ATS-V and CTS-V to rival shredding Corvette Z06. And what about those sweet pony cars? Well, Dodge’s Demon pushes 840 hp, Ford’s GT350 hides flat-plane crankshaft under the bonnet, while Chevy’s ZL1 1LE has faster time around Nurburgring than Ferrari 488 GTB. Lovely! Each one of them found its sweet spot under the sun. Challenger is ridiculously powered, even with lesser 707 hp Hellcat, Mustang is once again best-selling sports car in the world, and Camaro is just unbeatable at any track by pretty much anything. But, Ford hasn’t been so humble to satisfy just with sales figures and some segment’s shuffling is on the verge.

Track oriented Mustang Shelby GT350R falls short of Camaro ZL1 1LE’s lap times, although we haven’t even seen true Z/28 yet from Chevy. Surely, Mustang is highly superior over Challenger’s cornering abilities, but Dodge doesn’t even try. It is mainly built for the straight line or mandatory for it in the case of Demon. Also, Challenger leads by high margin horsepower stats, Camaro ZL1 is fairly close to 650 hp, while Mustang with 526 hp in a case of Shelby treatment, appear rather meek. Well, ok, meek just for the sake of this comparison. There is nothing above GT350R to arrive in Ford’s lines, as far as hard-core track stuff goes, leaving “blue oval” to catch a train to the “land of horses.”

Current inferior number of horses offered by Ford will soon mean nothing as power balance is destined to turn. We knew all this time that we haven’t seen all by Shelby, as who could forget about that monstrous GT500 and its 662 hp, from just five years ago. And yes, Shelby GT500 label, highest with any Mustang, is on the path of return, highly inspired to clash with Hellcat’s and ZL1’s figures. The Demon is purely a drag race tool, so we’ll put it aside in this case. And sheer number? Possibly around 700 hp. Maybe 708 just for spite sake. But one big question remains.

So, what could propel this kind of monster? Well, either 5.0-liter V8 Coyote from GT model or 5.2-liter V8 Voodoo from GT350/GT350R models. That raises another question. Turbocharged or supercharged? Both V8 mills are naturally aspirated, and for reaching that estimated figure, outside help is needed. Ford has love affair lately with turbos, suggesting that Coyote might get two of them for the mentioned deed. Or it could appease its heritage and mount a supercharger on top of Voodoo, which would also be same as rivals did. Or it can “twin-turbo” Voodoo? Manual gearbox for sure, but maybe 10-speed automatic also? Time will tell.

GT350R looks mean or better, more like sinister, so 2019 Ford Mustang Shelby GT500 has to look ravish than. Hood could be possibly punctured in more than one place, and shark like fascia will deploy its sharpest teeth so far. The rear wing is differently shaped on caught test mule from one on GT350R, while heavy camouflage still allows us to see that lower part of the front bumper is unique to it. We don’t see much else, but we know it’s gonna be hot. Very hot! This is at the end, Mustang’s highest echelon.

So, the question on everyone’s lips! 2019 Ford Mustang Shelby GT500, when? Possibly even during this year. If not, next one is certain. We haven’t helped much here, but this year Shelby GT500 moniker celebrates fifty years of life, so we sincerely hope that Ford exploits this convenience. Price? Hellcat starts at $50k, ZL1 is at $62k, GT500? Let’s say $65k for example. 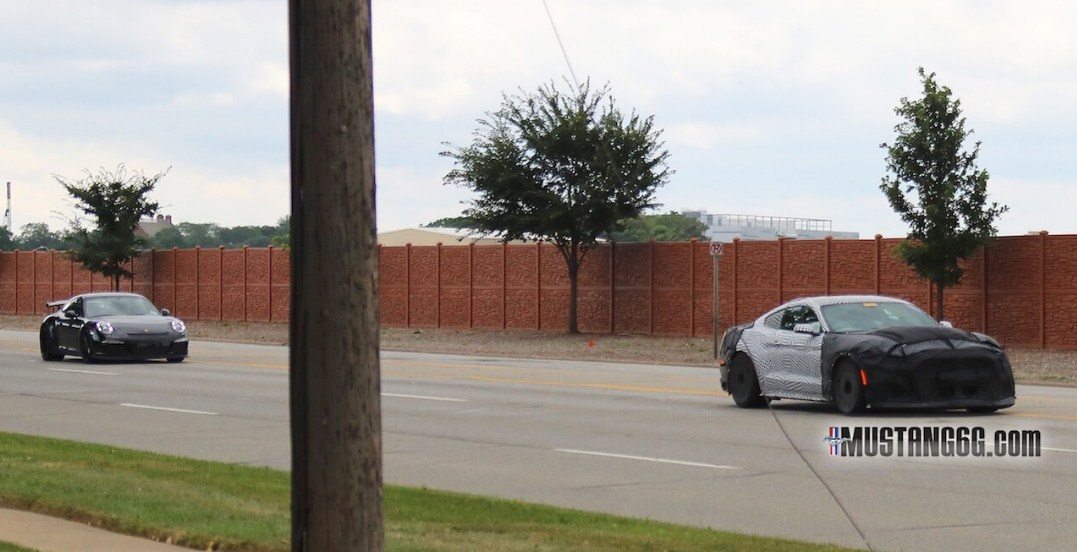 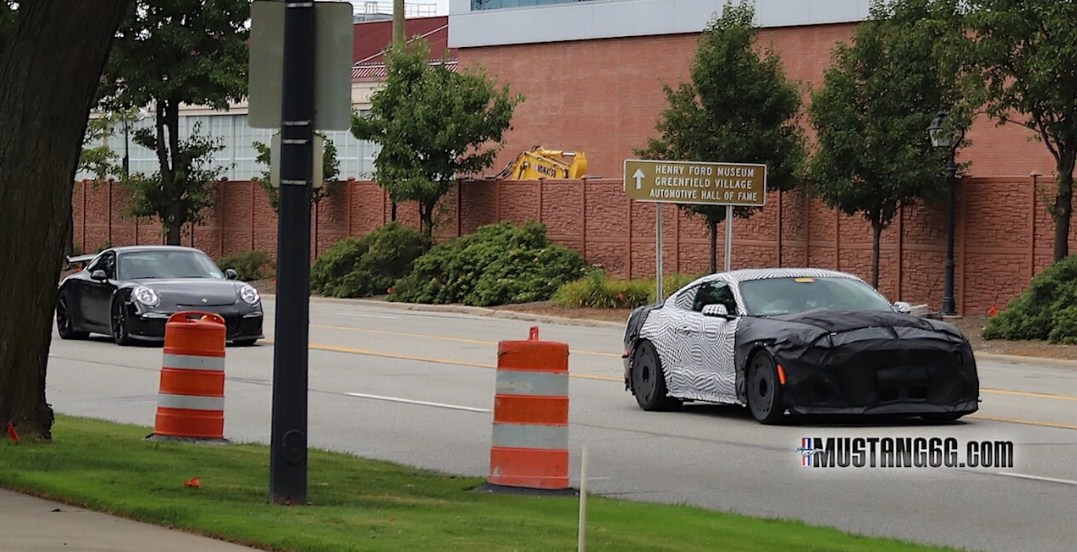 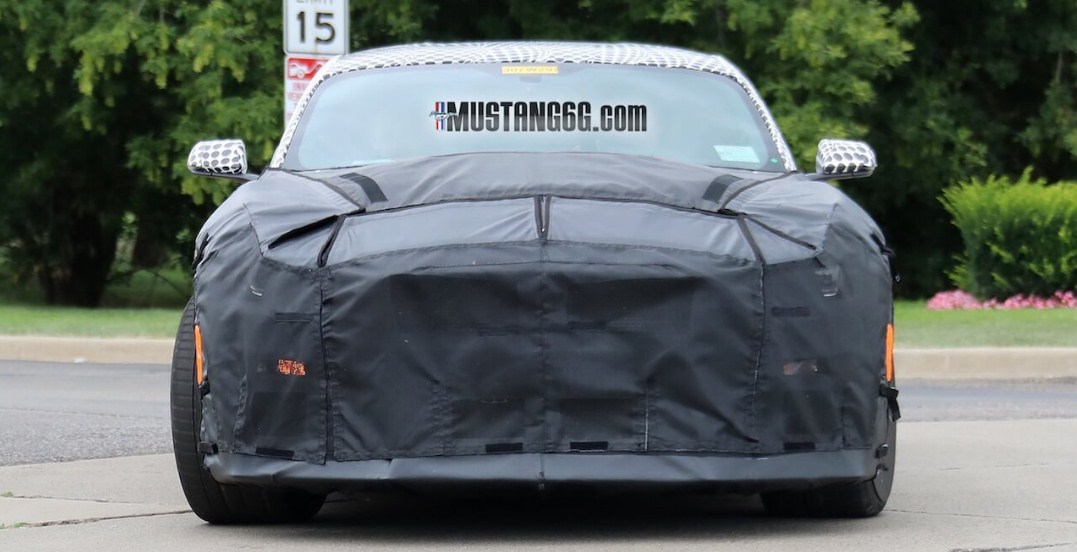 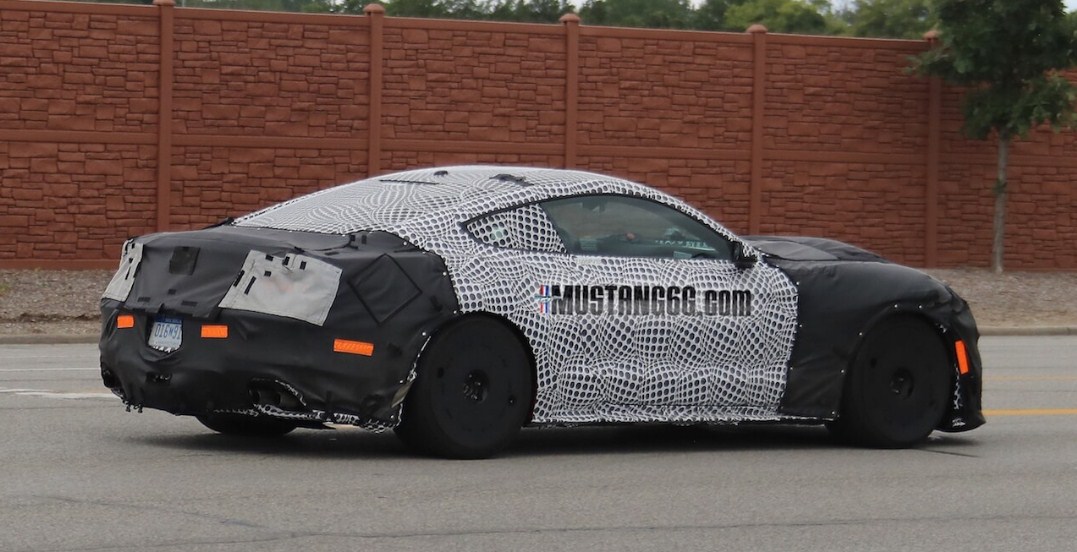 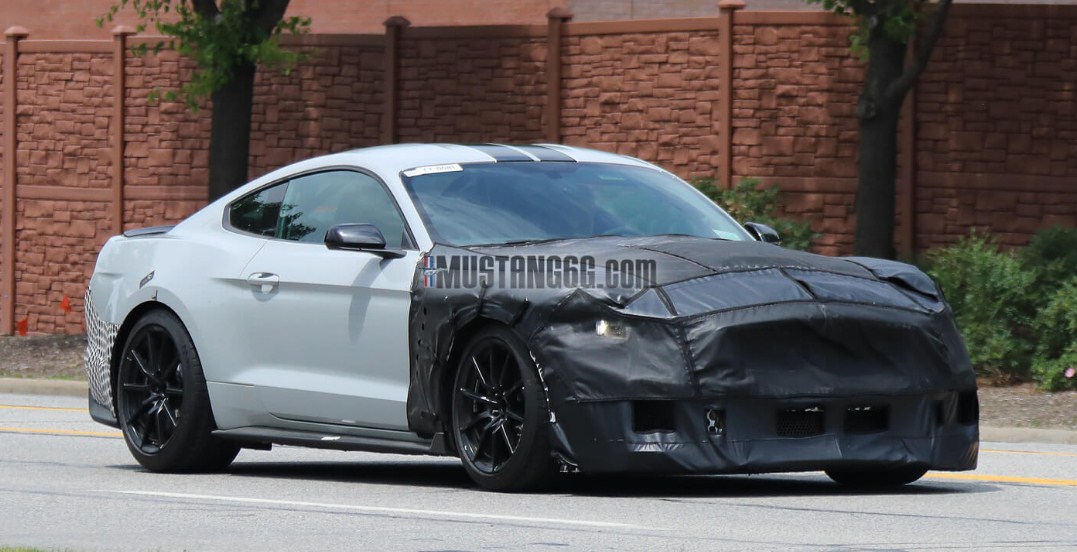 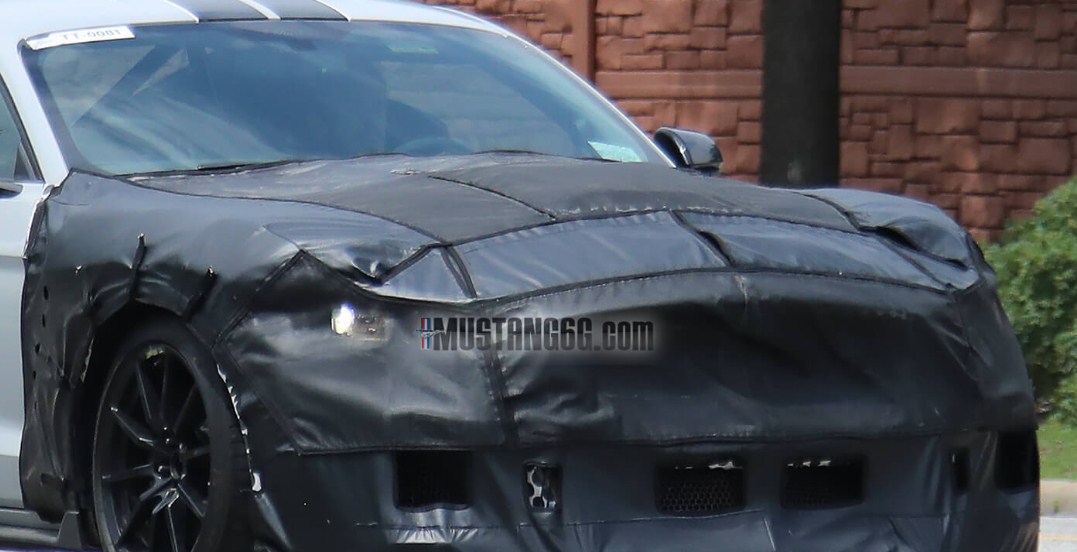 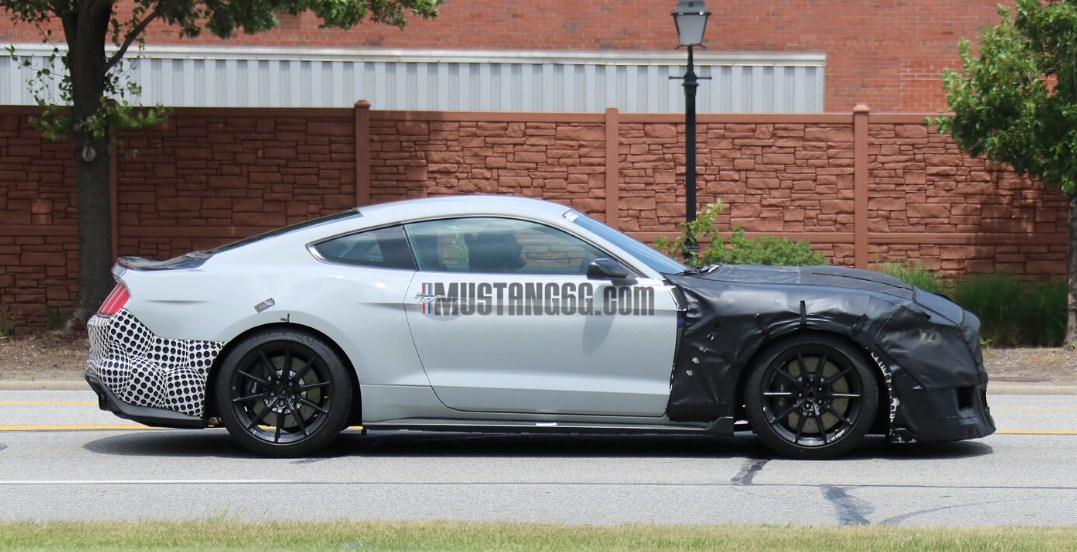 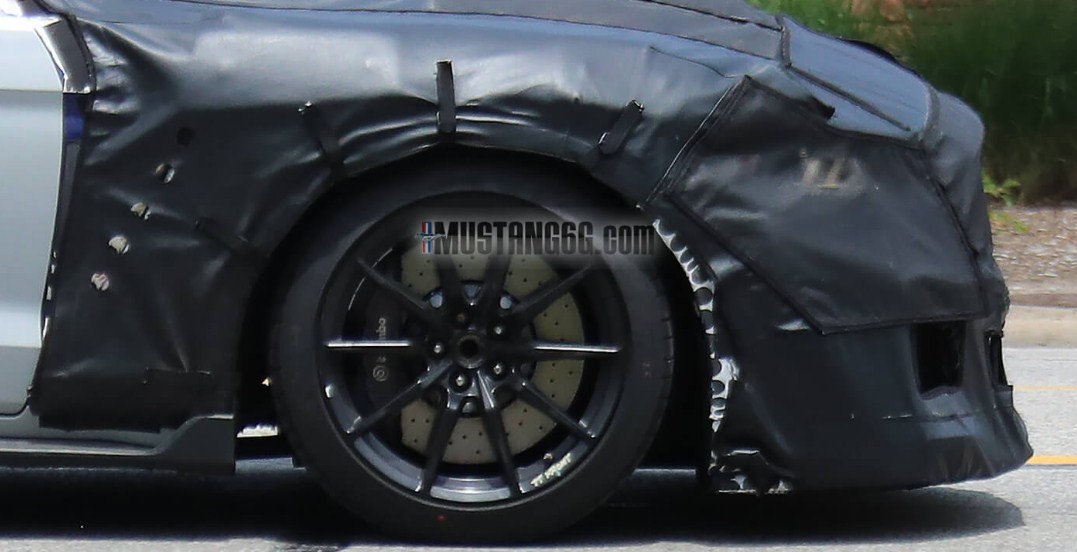 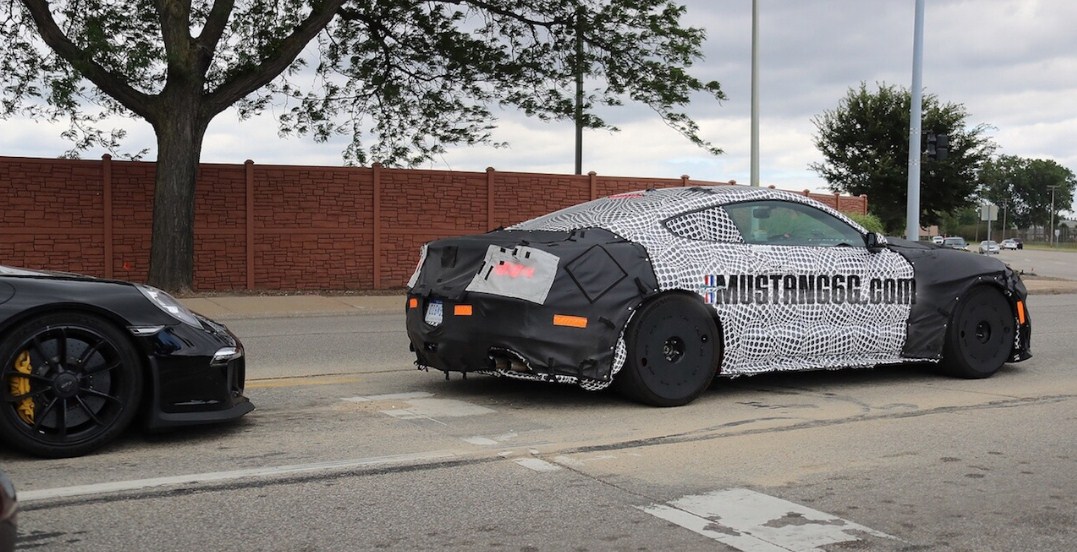