Honda revealed the all-new Clarity nearly two years ago. At the time they also announced they were going to release three different versions for the car. One of them was going to be the 2018 Honda Clarity plug-in hybrid. Well, the manufacturer just announced this model and set the pricing for it. The best part about it is a fact the car is actually cheaper than what the rumors suggested it was going to be. This means the new Clarity might have what it takes to become the best selling hybrid car on the US market.

The new Clarity is using Honda’s new modular platform which has been around for a couple of years now. This means it features the same running gear and roughly the same driving characteristics as the Accord. However, the car is more efficient, more aggressive in design and it features some really interesting perks. Honda also announced the hybrid will go on sale on the 1st of December and it will have a starting price of just $33,400. This makes it a steal, especially since it is basically the same car as the hydrogen fuel-cell version but without the really expensive hydrogen system.

As we said, the Clarity has to feature one of the most impressive looks among all hybrid sedans currently on sale. The really slim swept-back headlights, the sharp-looking grille, and the L-shaped fog-lamps make it stand out. Also, the car features quite a few aerodynamic inserts such as a front splitter, a rear diffuser, low side-skirts and under-body air ducts. The turbine-like wheels also help it with the aerodynamic profile in order to make it as efficient as possible. While sold as a sedan, the car is more of a hatchback with a similar profile to the Prius.

The interior is also quite impressive. The materials are well above the average of its class while the available features are better than those in the Accord. The only real drawback here has to be the lack of leather upholstery, but the car is great either way.

The 2018 Honda Clarity plug-in hybrid features a 181 horsepower electric motor which drives the front wheels. This is then fed by a 17 kWh battery-pack which is enough for up to 47 miles on a single charge. The car also features a tiny 1.5 liter naturally aspirated mill which can not only charge the batter but also drive the front wheels under certain conditions. With it, the car offers 110 MPG equivalent which is better than any of its rivals.

Honda Clarity was introduced in 2008 and is based on the FCX Concept. That is the reason it had “FCX” in the name but abandoned it three years ago. This midsize sedan brought a revolution in the car industry with zero emissions and a five-time charging time. The second generation came under the name of Honda Clarity Fuel Cell, and it hit the US markets in December 2016. However, that’s not all from this generation. Two new plugins have been announced which are supposed to have stunning performances. The 2018 Honda Clarity will come out soon and make some serious changes on the market.

The second generation is revolutionary. The engineers at Honda did a great job and increased driving range. In fact, it has the highest driving range rating among zero-emission vehicles. With 589 km (366 mi) of EPA driving range, the second generation of Clarity is on the top. Currently, not even Tesla cars can compete with the Japanese automaker. This will have an impact on the other automakers. Thus we can expect electric vehicles with better mile range in the year ahead.

When it comes to fuel economy ratings this vehicle is a leader in the world once again. With a fuel economy of 66/68/67 MPGe (standing for miles per gallon gasoline equivalent), you will just love it. That is an increase of 8 MPGe of combined fuel economy. The mile range also got an increase since 2014 model had a range of 372 km (231 mi). Considering these aspects new Clarity is one of the best cars we have ever written.

Honda surprised everyone with the announcement that it is launching two additional variants of the Honda Clarity 2018. The announcement had been released in April last year, but they didn’t release much info about them afterward. The variants are Clarity Electric and Clarity Plug-in Hybrid. According to the InsideEVs, the plug-in is expected to have an all-electric mile range of 64 km (40 mi). The same website states this car will be available in all 50 states, even in Hawaii and Alaska. Comparing to Chevrolet Volt, it has lower electric range. The Volt has a range of 53 miles, but the next model of Clarity will probably be better than the upcoming variant.

Okay, enough about mile ranges, fuel economies, etc. and let’s about design. The 2018 Honda Clarity is coming in three different colors: maroon, white and black. Generally, it looks stylish and elegant with new long headlights. The front bumper will also be redesigned, and there are some speculations the vehicle will be few inches larger comparing to the current model. This means the interior is going to be spacious and passengers will have additional legroom and headroom.
The midsize sedan can accommodate five people. The seats are going to be wrapped in leather, and they will be the same color as the cabin. Safety systems haven’t been upgraded nor have been the technology. The infotainment system is inherited from the previous generation, and it features Apple Carplay and Android Auto. All in all, the cabin will follow the exterior, meaning it will be elegant and stylish.

The 2018 Honda Clarity determined different release dates for different trims. All trims are coming this year, but it is almost certain the Electric is coming ahead of the Plug-in. All of them are coming in the second half of 2017, but although the release date is close, the price still hasn’t been confirmed. The Clarity has better performances when it comes to certain aspects, but it cannot compete with Tesla cars regarding price. The American automaker finds a way to manufacture relatively cheap vehicle while the new Clarity will cost several tens of thousands dollar more. 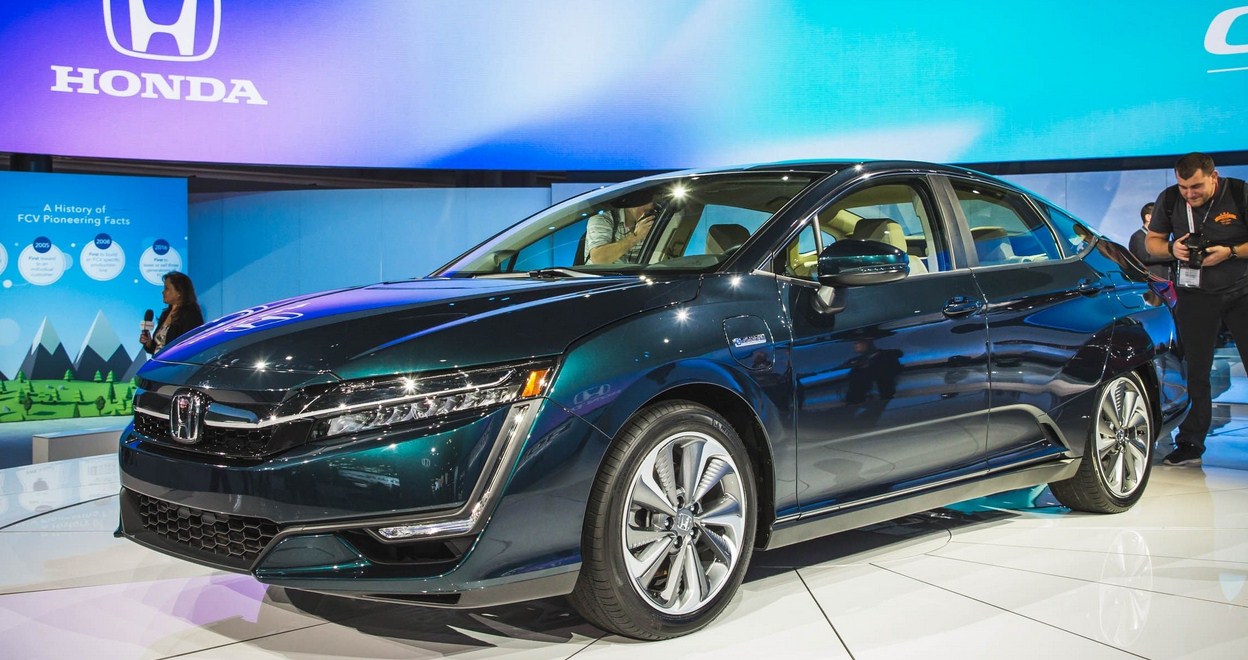 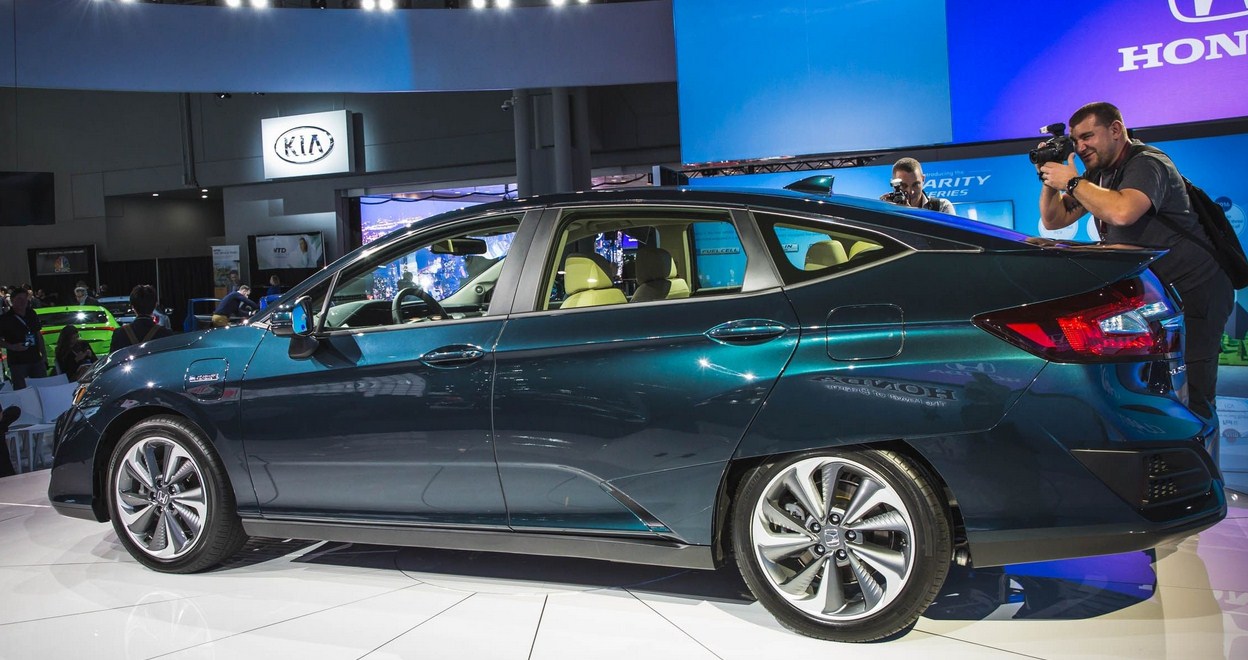 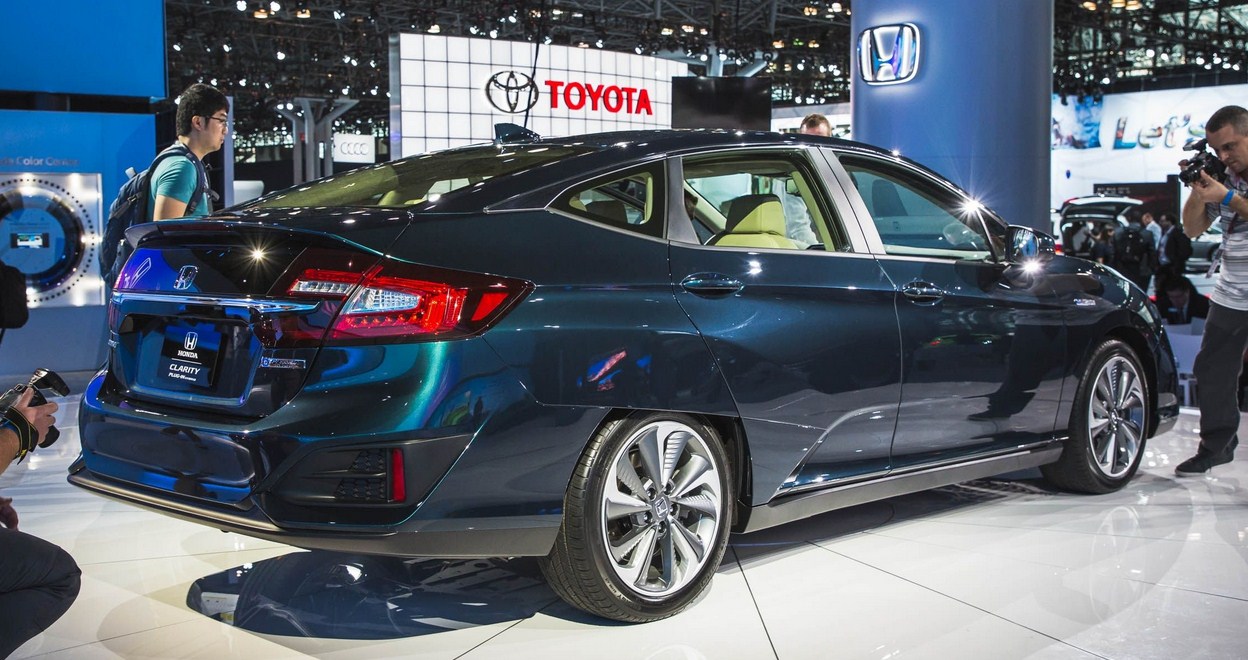 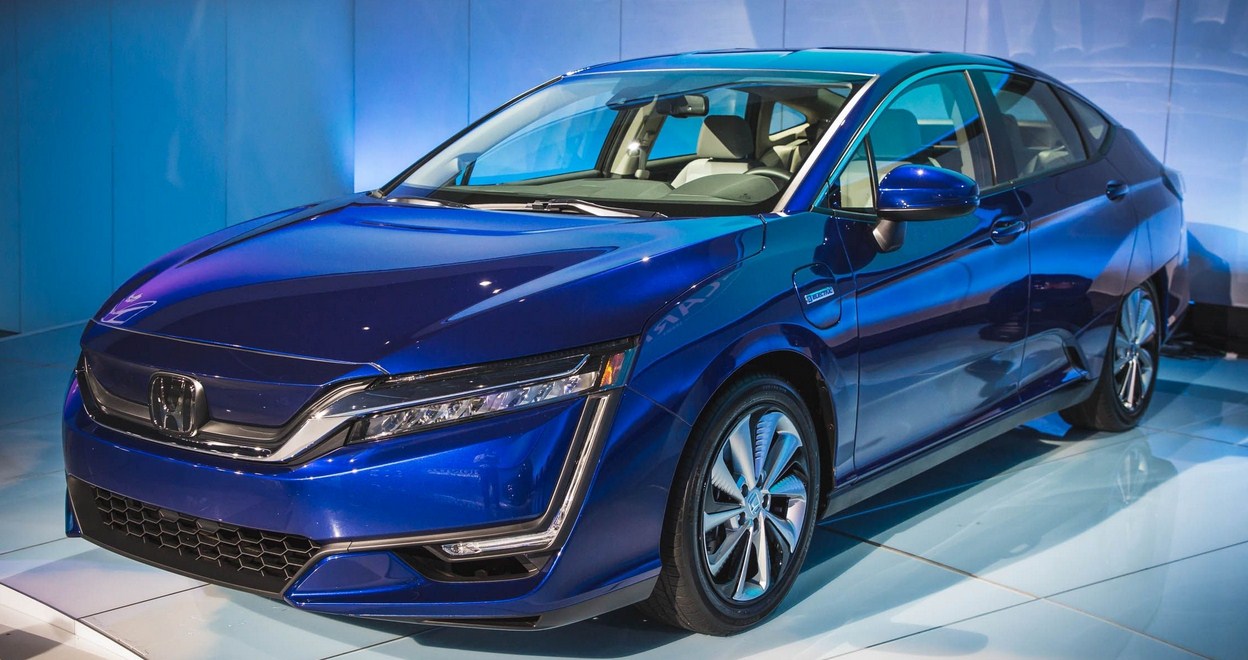 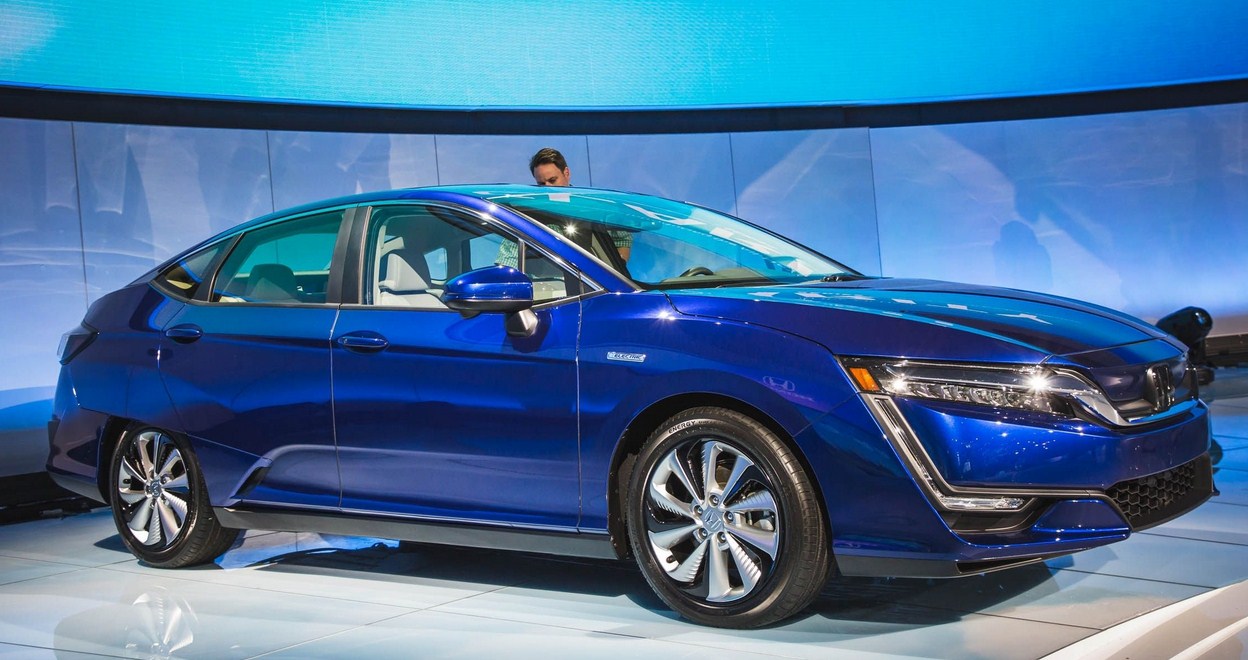 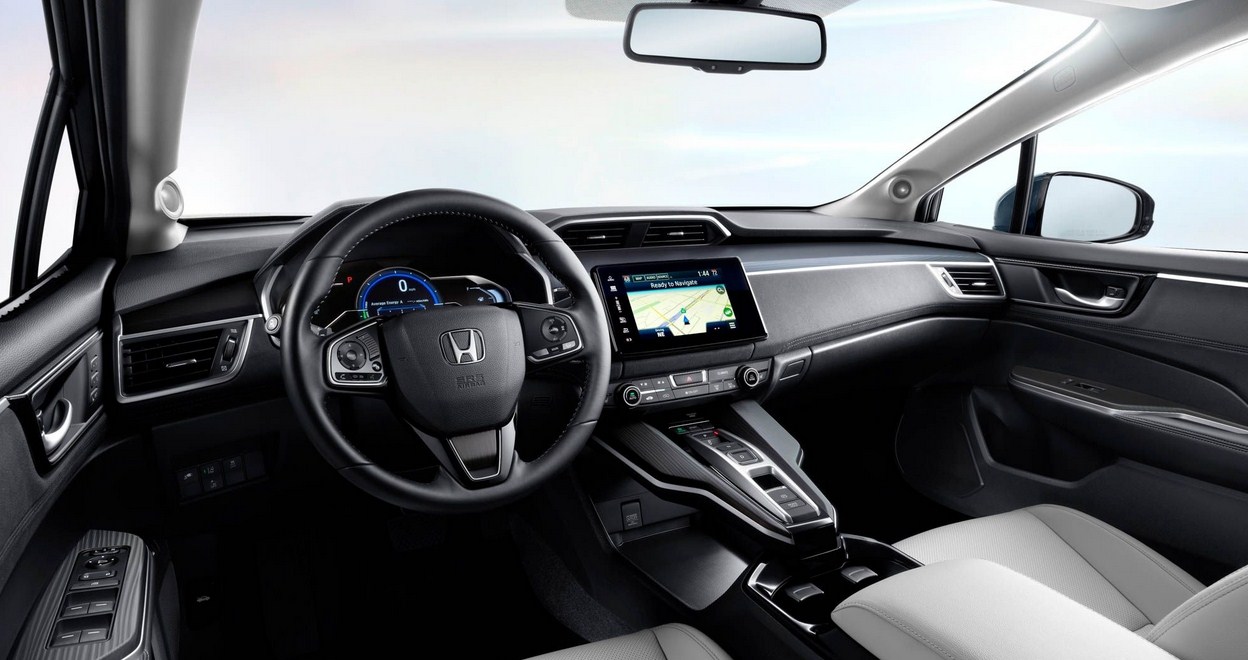 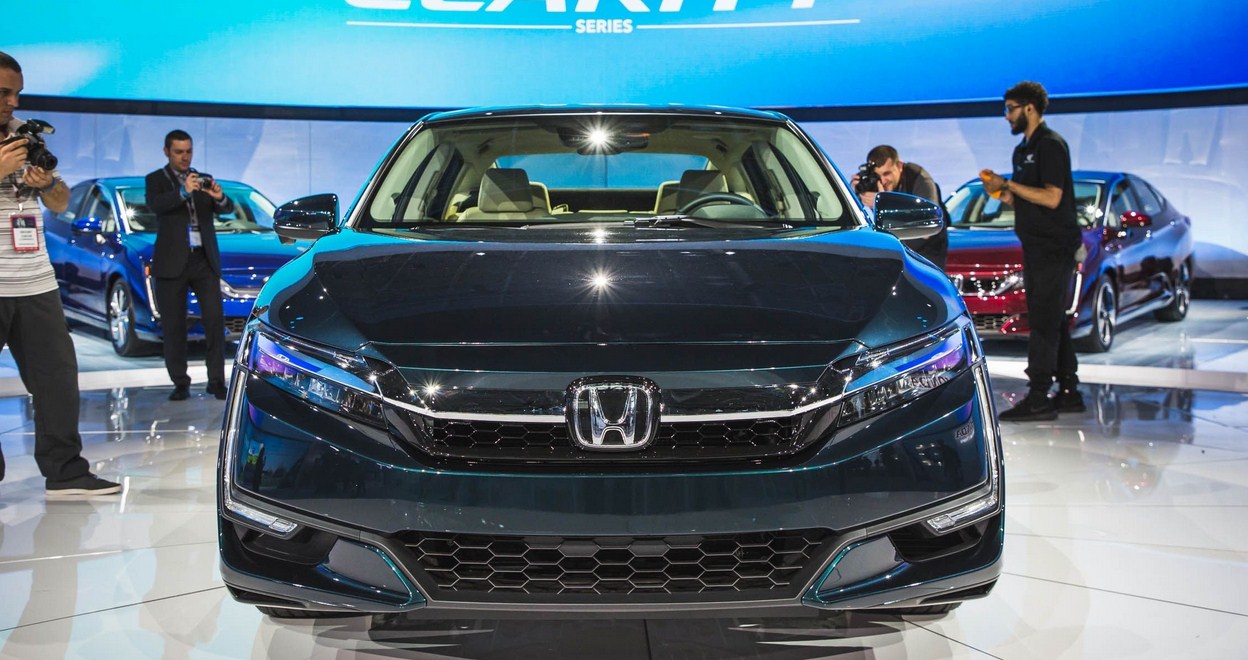 The 2018 Honda Clarity is coming in three different colors: maroon, white and black. Generally, it looks stylish and elegant with new long headlights. The front bumper will also be redesigned, and there are some speculations the vehicle will be few inches larger comparing to the current model. This means the interior is going to be spacious and passengers will have additional legroom and headroom.