2020 Toyota Tundra Hybrid – Or maybe refreshed 2018 Toyota Tundra, place your bet! US market is a good one for newcomers, as you can see here. Its buyers are not shy of trying something new as long as it has something decent to offer. Japanese trio chooses that side of the ocean to start with luxury aspirations at the end of 80’s and so did Korean first upmarket label two years ago. Still, even there, some parts of the automotive world are entangled with feelings of national pride and any foreign intrusion is usually pushed aside satisfying itself with leftovers. American truck segment is huge, but buyers are linear and after Ford, Chevy and Ram there is not much left for others.

When you’re pushed against the wall, in this case by sales Titans, you can use either brake under pressure or emerge stronger. Both Japanese makers clearly reacted in former manner, especially Nissan. Titan held for painfully long 12 years on the market, and a new generation came compromised experimenting with milder heavy duty approach. Let’s just note that we don’t forecast mentioned recipe to settle well under the umbrella of truck buyer’s likings. But, compared to Nissan’s sales data, Toyota managed to perform much better, gathering as much as half of GMC’s annual sales figures lately. Fine, figures are maybe acceptable enough for positive financial reports, but a case of neglect is obvious.

To Much Time, to Little Happenings

Current second generation Tundra debuted in 2006, which makes it almost eleven years on the market. Despite several nips and tucks it is just too much, and recently introduced TRD Sport package hardly changes anything, especially since “more than just cosmetics” TRD Pro existed from before. According to rumors, the new model shouldn’t arrive before 2022 model year, while another refresh could be theoretically squeezed between. Recently, spy photos emerged depicting totally unmasked Tundra with tweaked fascia, so could that be a 2018 Toyota Tundra? Is this another shot of Botox possibly set to debut during this year?

Full-size truck in question featured on photos bare completely reshaped grille with large horizontal slat housing badge. Headlights are also different, not in shape, but in interior layout. Still, something appears strange and unnatural, while the whole ordeal just doesn’t suit brand’s current design approach at all. And why would uncovered specimen be allowed to roam through public streets? When spy photos emerged, Toyota’s spokesman denied that truck in question was a prototype or even owned by Toyota, while it is on us to believe them (or not). That could erase facelift theory, but what could it be than?

If We Have to Place a Bet…

We would place it on a hybrid. And that possibly could be 2022 Toyota Tundra Hybrid. You see, Japanese have worked on this idea together with Ford, but then things were suddenly aborted when Americans abruptly left the scene deciding to go solo. GM already openly tested the idea with Silverado, which hasn’t gone especially well, but if somebody could pull such a move and presumably make it a success, Prius’s creator is certainly the one. Since the introduction of the hybrid powertrain is unlikely to happen before new generation arrives, we would mark this as a test mule, utilizing present body for testing of future technology.

That could explain weird plasticky grille with a plastic front badge and altered headlights. The divorce between Toyota and Ford on the matter in question hasn’t run smoothly since, while this could be a showcase of determination to follow through, coming directly from the land of rising sun. Whether this is 2022 Toyota Tundra Hybrid or tweaked 2018 Toyota Tundra or perhaps something else, only time will tell…

02/09/2017 UPDATE: Today, tomorrow, Toyota. One of the slogans which were used by Japanese automaker is being applied very well in the daily life of this manufacturer. Now we can add yesterday or even every day because starting from the new year it seems Aichi-based company doesn’t sleep. 2017 NAIAS saw Camry, the year before we had Corolla, RAV4 and now we have, at Chicago Auto Show, new Tundra and Sequoia. In this article, we will update you about 2018 Toyota Tundra. Also, to refreshing for 2018 MY Toyota will add TRD PRO alterations to both models.

Major changes will happen on the inside because now Tundra will have as standard options such as Pre-Collision System with Pedestrian Detection, Lane Departure Alert, Auto High Beams and Dynamic Radar Cruise Control. On the exterior, we have new mesh grill which will be of a different kind depending on the trim level of your choice. Other parts updated include new headlights for each trim, fog lights for Limited, Platinum, TRD PRO and 1794 models.

Toyota is only doing a mid-cycle refresh, but new options on 2018 Tundra are numerous. They include a new selection of colors, new bumpers on different trims, new hood scoop and 20-inch silver wheels. Under the hood 2018 Toyota Tundra will have standard engine lineup transferred from 2017 MY aided by 5.7-liter V-8 with 381hp.

In the recent years, many pickup truck manufacturers have redesigned their vehicles. Toyota is one of the world leaders in this field but it seems that somehow they neglected Tundra. Tundra is one of the most popular pickups. However, it appears that its popularity is going downward spiral. Toyota hasn’t changed much for a while, only minor updates and refreshments. We believe that 2018 Toyota Tundra will bring Tundra its glory.

At the moment there is no much info about this model but there are some speculations about design, engine, and modifications in general. Whether new Tundra is going to be redesigned or not find out in this review.

UPDATE: Toyota has released a lot of information about new 2018 Tundra since the release date is getting closer. Some speculations have come true, some have not. We’re especially disappointed with the lineup due to lack of new units.

NEWS: According to motor1.com, the camouflage 2018 Toyota Tundra spotted in southern California. 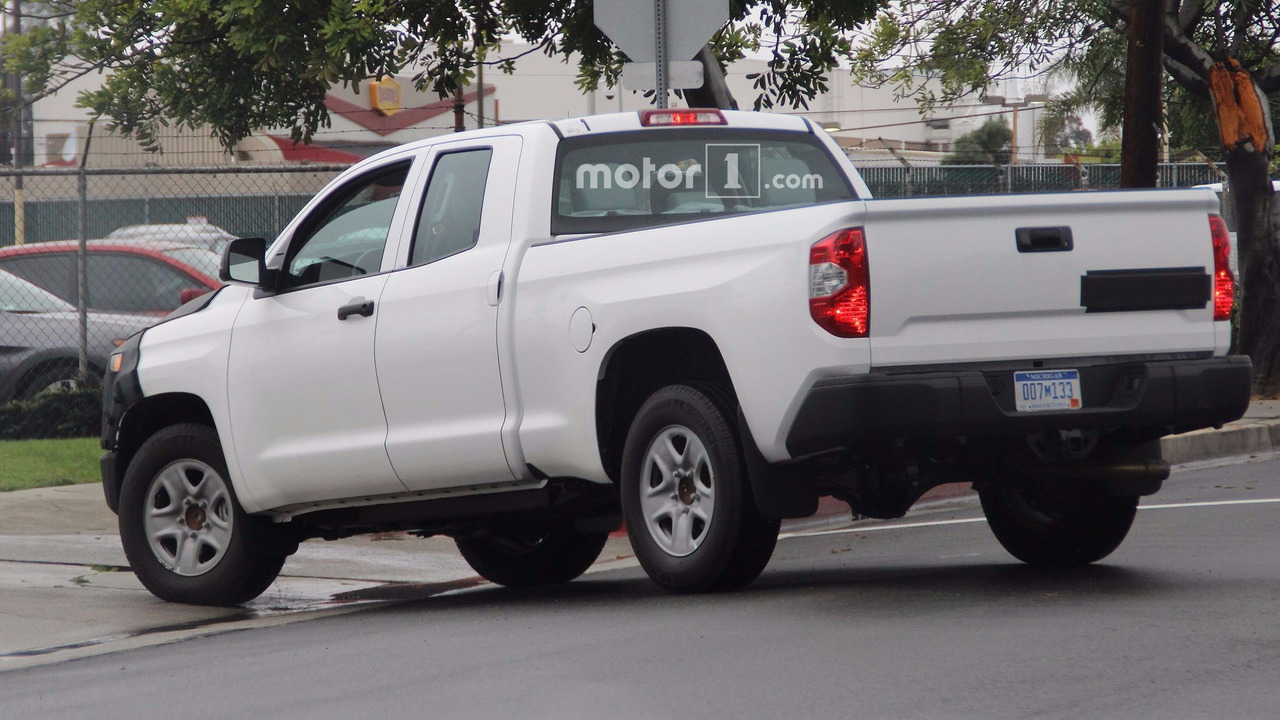 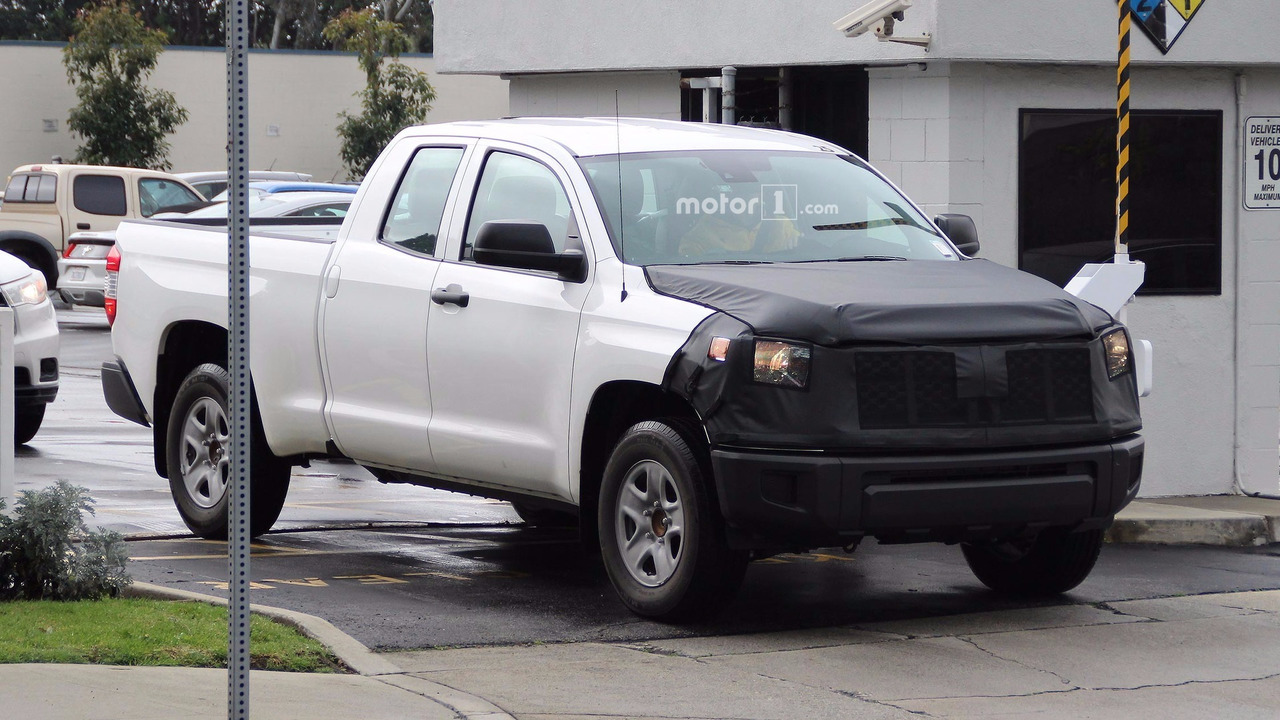 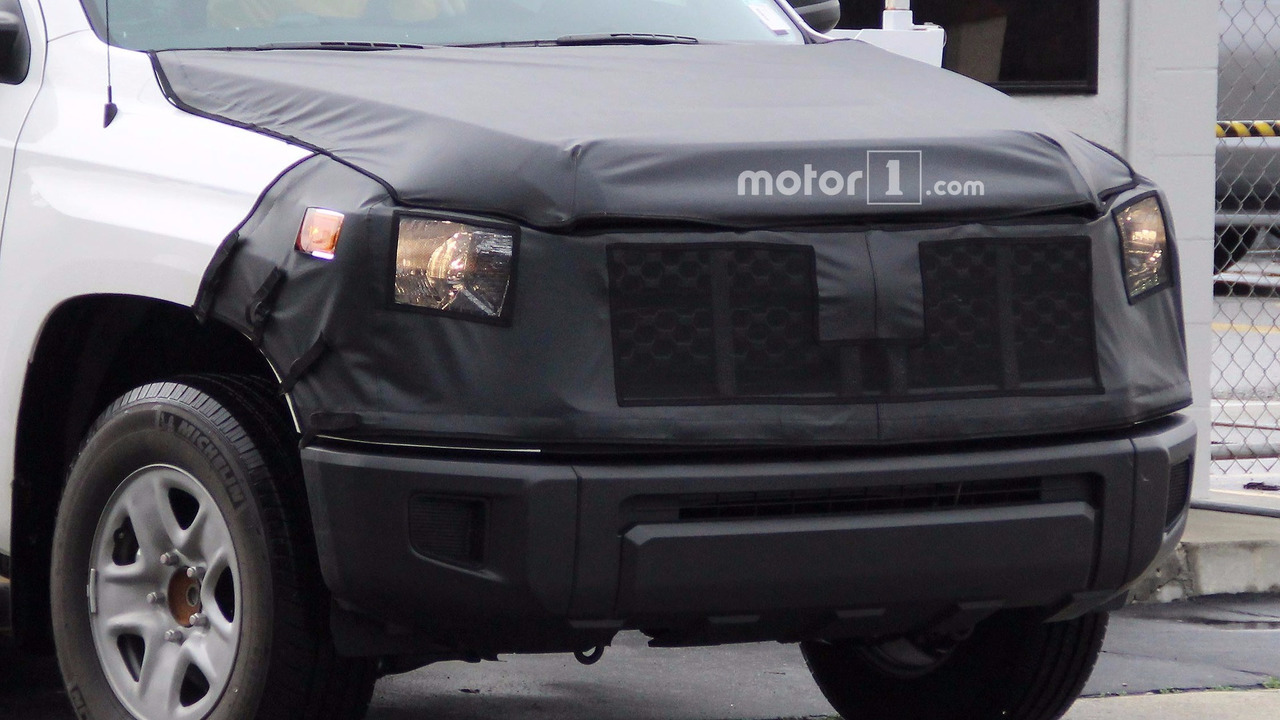 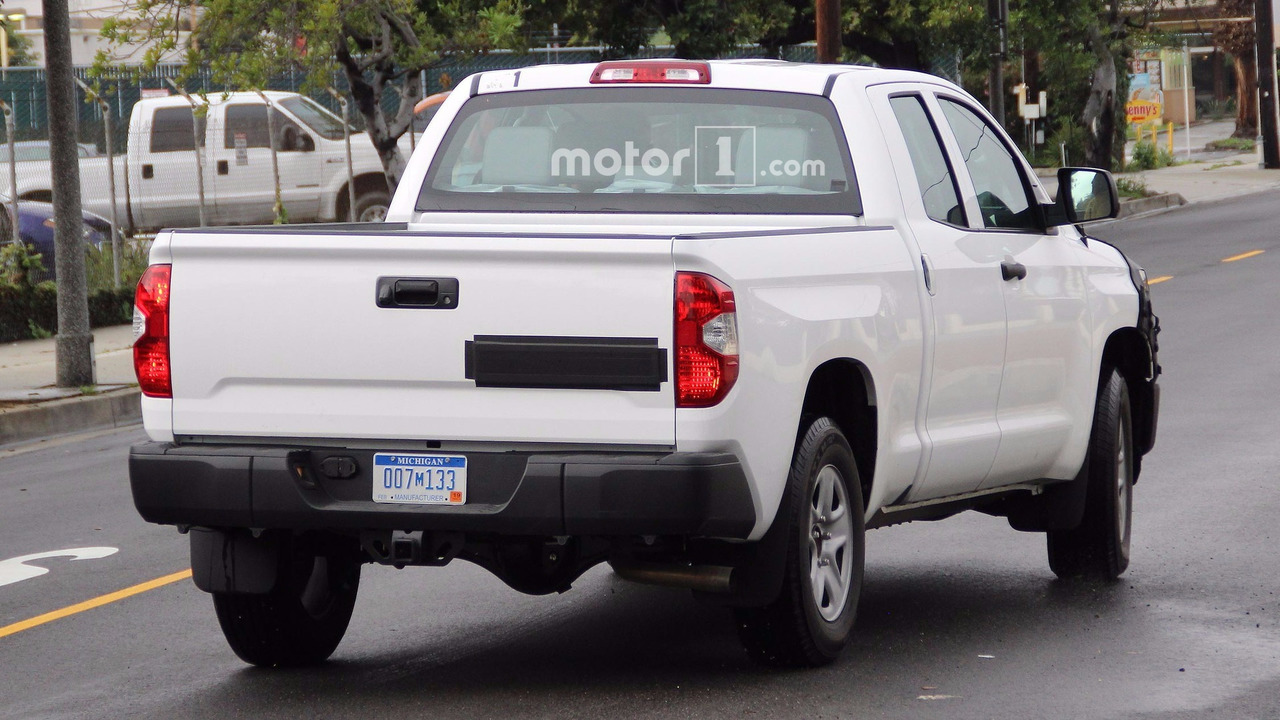 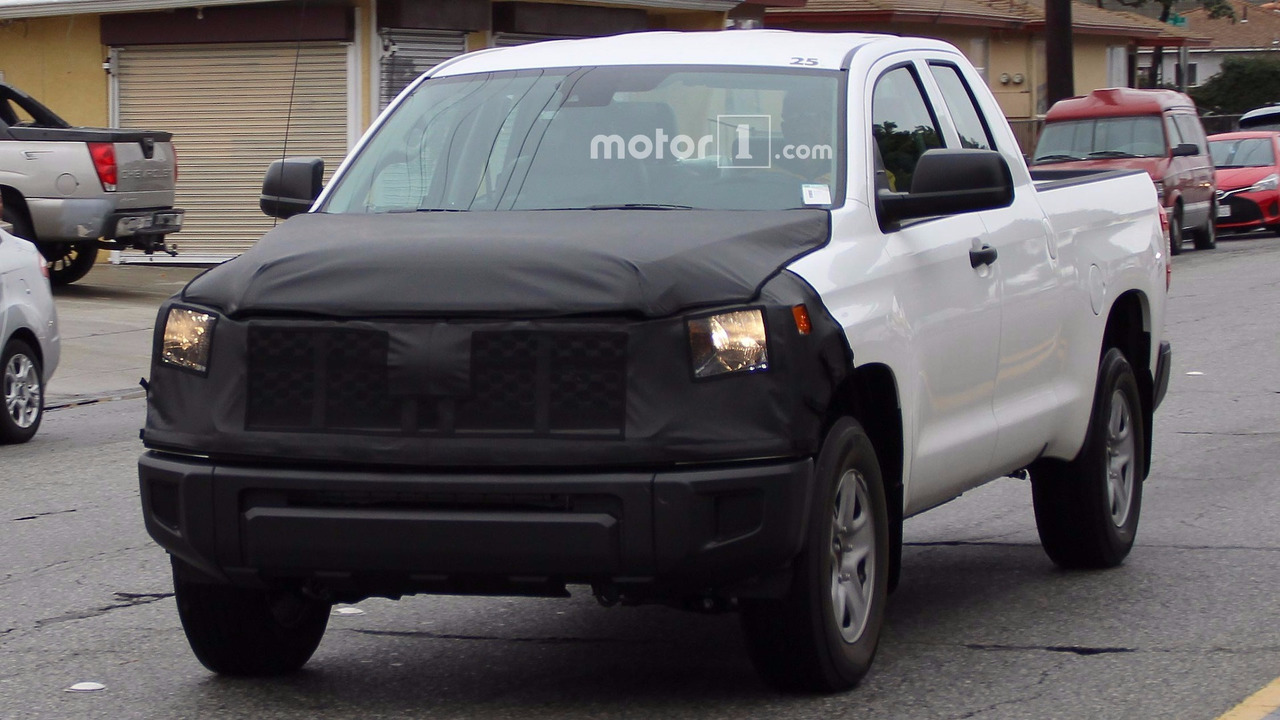 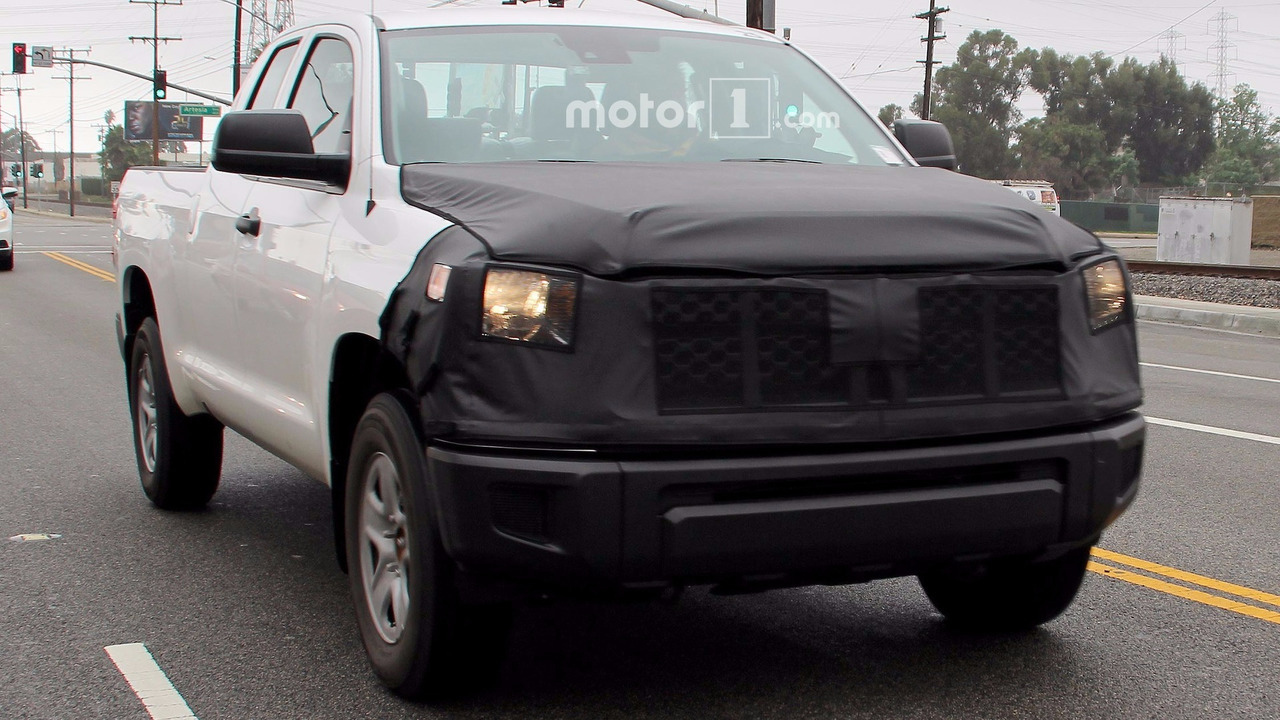 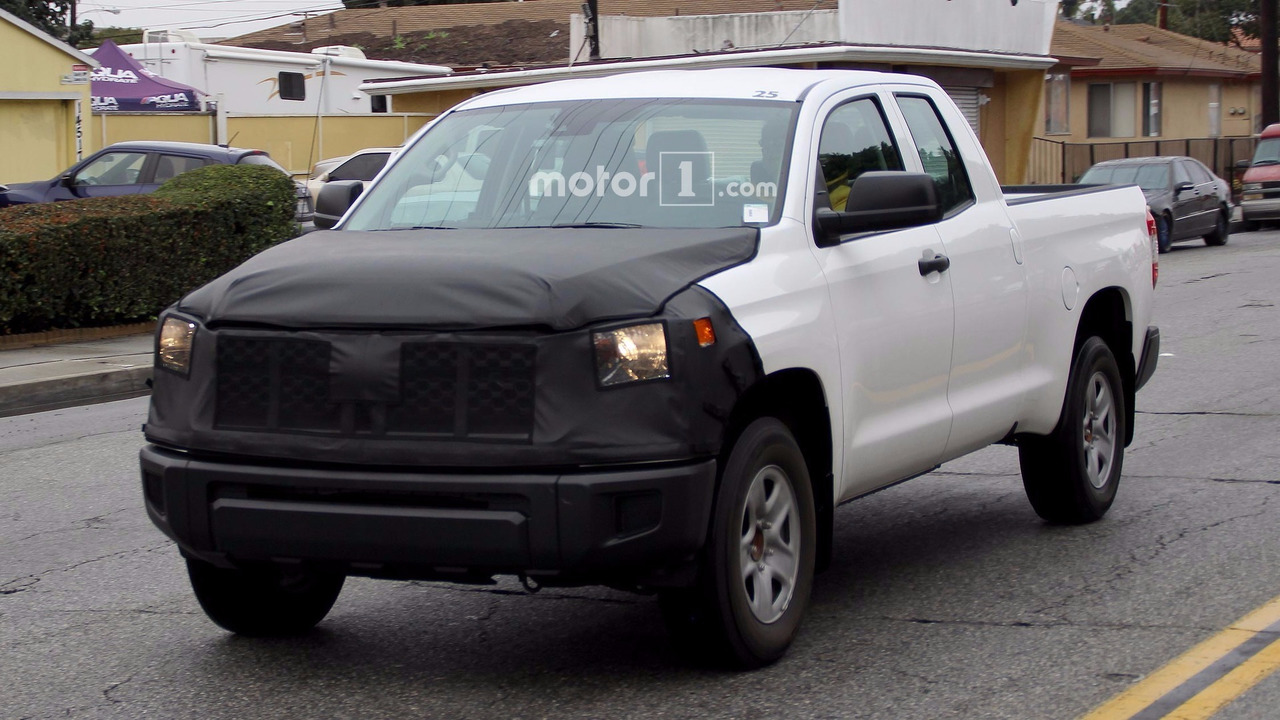 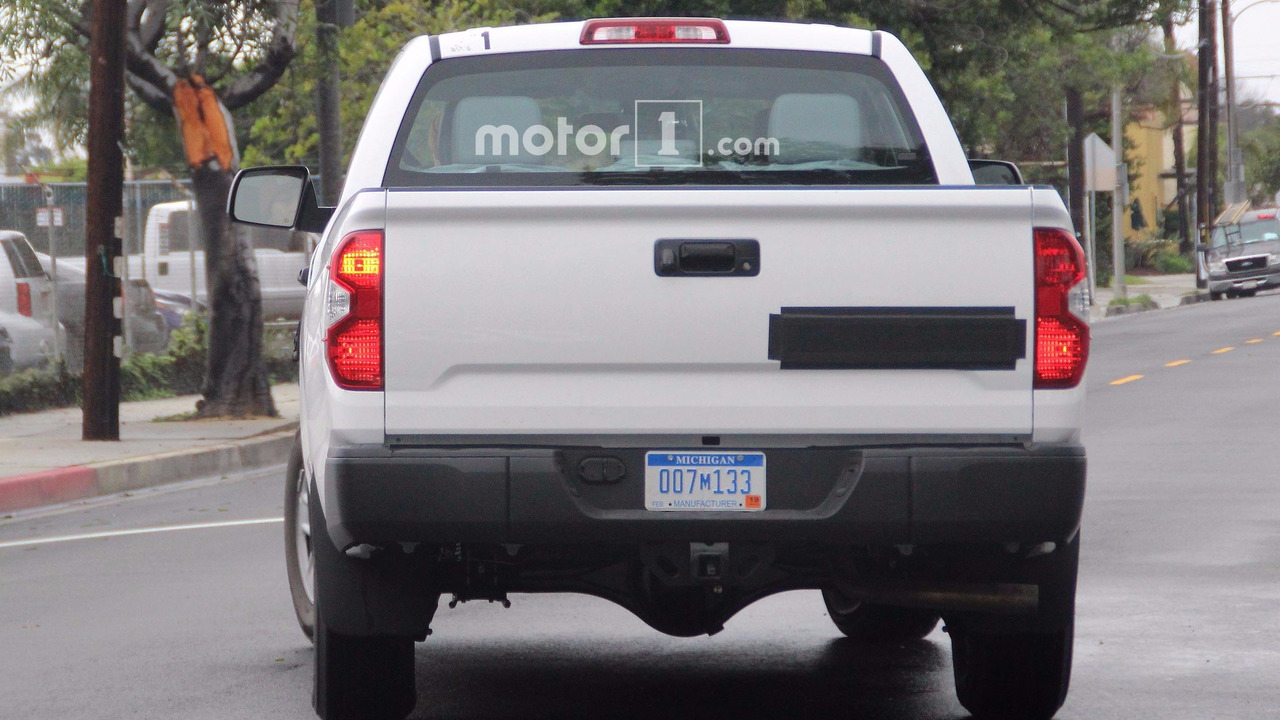 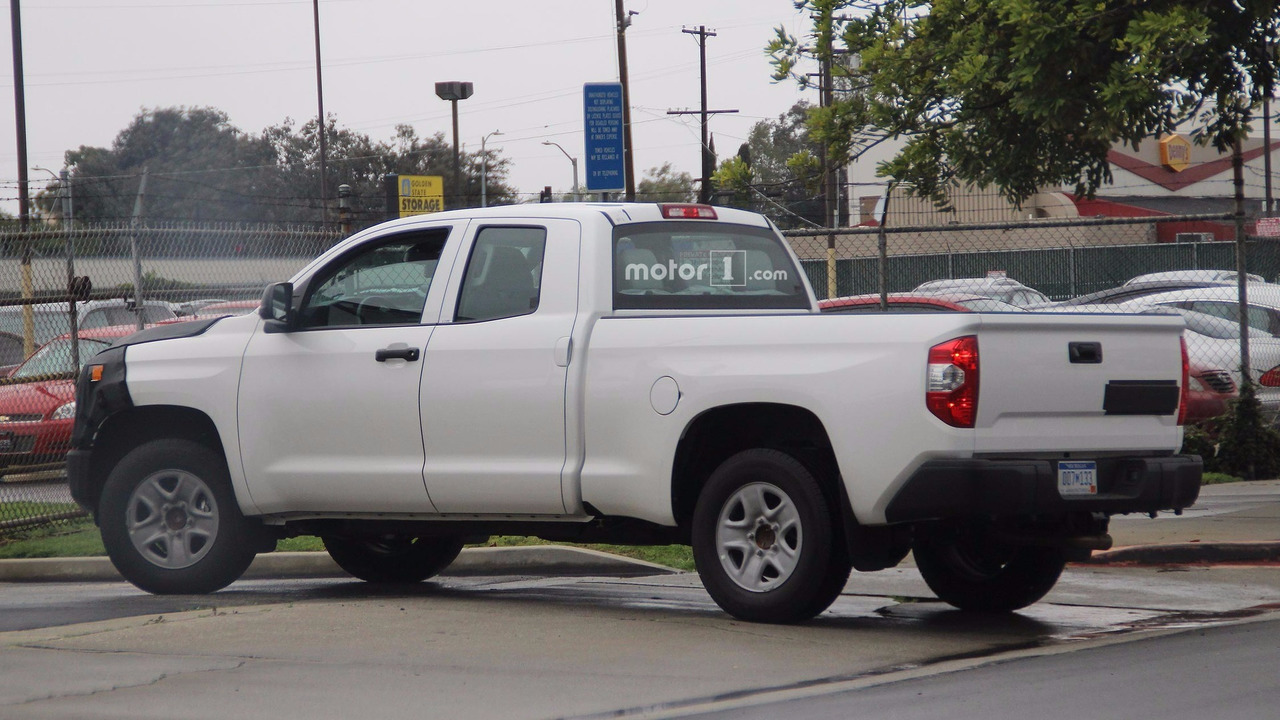 The price range hasn’t been determined yet but the minimum price should be around $30,000. Higher trim levels will naturally have a higher price. Reportedly, 2018 Toyota Tundra will be released at the end of 2017 but don’t get surprised if you see it on some shows way before than that.

UPDATE: Prices have been officially confirmed! The range goes from $30,000 for the base model to $46,000 for Platinum. And it will be presented way earlier than it was expected. The 2018 Tundra will have its debut at the 2017 Chicago Auto Show. Then we will hopefully have all the information about the latest model.

It is still unclear what changes will new 2018 Toyota Tundra have. However, there are some unofficial rumors regarding both design and engine. Reportedly, body and chassis are going to be modified. In general, the platform is going to be slightly different. Apart from that, we expect some minor changes as well. Allegedly, new engine options will be offered but don’t take to the bank. We are going to enlist several possible changes and hope Toyota will confirm these speculations.

UPDATE: It appears that platform will be slightly modified, but it will be based entirely on steel. Lack of aluminum leads to higher fuel consumption. Toyota must consider redesigning the platform, but this is not expected before the next generation. Body and chassis got some modifications and new fenders are used as well.

The current model has an engine lineup consisted of two different powertrains – 4.6l and 5.7l units. These two are out of date and they should be replaced. They have been under the hood of Tundra for a while and they are not as efficient as the engines developed by competent automakers. Rumors are telling us that turbocharged engines are going to be used this time. The base unit should be a 3.0l inline-6 which takes after BMW engine. However, we are not certain at this point whether this unit will be equipped with one or two turbochargers. This means its output should be somewhere between 350 and 500 hp while we can’t predict is fuel economy.

On the other hand, a 3.5l twin-turbocharged six-cylinder should also be part of the lineup. In addition, it seems that Toyota is going to the third unit to the lineup. The third option will be a diesel unit and it is most likely that it will be either a Hino-based unit or a 5.0l Cummins. We’re still waiting for the official confirmation but don’t expect that 2018 Toyota Tundra to have less than three different choices. As far as we are concerned transmission system is going to be changed and EPA rating will definitely be improved. At this moment we can’t our expectations but stay tuned with us in order to find out these details.

UPDATE: Unfortunately, Toyota has let us down when it comes to the engine lineup. It appears that rumors were not true and the 2018 model will inherit two engines from the previous model. There are some talks about the third unit, but the Japanese automaker will answer all questions at the 2017 Chicago Auto Show.

Toyota Tundra 2018 is coming in at least four different trim levels: SR Single Cab Long Bed, SR5 Double Cab, Limited Double Cab and Platinum Crew Max. They will differ in terms of curb weight, height, and wheelbase, while the rest of the things should be more or less the same. The cabin will be made of high strength steel which means we don’t need to expect exceptional fuel efficiency. Unlike the F-150 which is built of both steel and aluminum new Tundra 2018 will be entirely made of steel.

Fenders are going to be new but we can tell how they are going to look like. The cabin will so get some updates and refreshments, especially in terms of technology. We guess that final look of the cabin hasn’t been finally determined yet. However, we might see some new materials while cabin dimensions shouldn’t be changed. More information about the interior is expected in the following months.

UPDATE: In the article, we didn’t mention the 2018 Toyota Tundra TRD Pro. Toyota Racing Development USA manufactured the TRD Pro version of this pickup, but it will probably be released much later. Modifications will be focused both on the design and powertrain and are looking forward to seeing the enhanced Tundra on the streets.

Many speculations have come true. Body and chassis are new and the platform is slightly redesigned as well. People expected new engine lineup to be introduced, but it appears that the current units will be used once again. However, it is still possible Toyota will add some new engines to the lineup and we can just hope the Japanese automaker will answer these questions at the 2017 Chicago Auto Show.

The current model has an engine lineup consisted of two different powertrains – 4.6l and 5.7l units. These two are out of date and they should be replaced. They have been under the hood of Tundra for a while and they are not as efficient as the engines developed by competent automakers. Rumors are telling us that turbocharged engines are going to be used this time. The base unit should be a 3.0l inline-6 which takes after BMW engine. However, we are not certain at this point whether this unit will be equipped with one or two turbochargers.